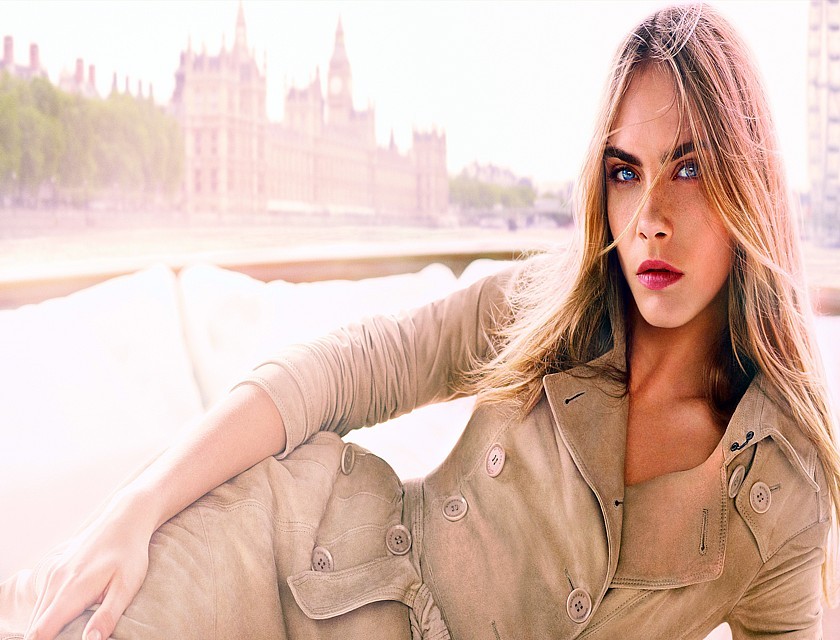 The fashion industry has a new queen. First she dominated the catwalks and advertising campaigns of the most famous brands, then in 2013 she even humbled the virtual world. She became the most sought-after name associated with fashionon UK Google. Despite that Cara Delevingne is not just a model.

Fashion designers love her; she has millions of fans, but also a large number of detractors, who believe that she achieved her success through nepotism. Cara Delevingne is not, and never was, an ordinary girl. She comes from an aristocratic family that has close ties with the Royal Family. Cara Delevingne’s grandmother was the lady-in-waiting to Princess Margaret, who was the sister of Queen Elizabeth II. Her grandfather published a newspaper aimed at the upper classes. And thirdly, her godmother is the actress Joan Collins.

A rapid ascent
Cara Delevingne’s career began early. At ten she appeared in the Italian edition of the prestigious fashion magazine Vogue, she also appeared in an advert for chocolate. The fashion world first took notice of her in 2011 when she was 19 years old. At the time she appeared in campaigns for Burberry and H&M. She made such an impression that other fashion brands began to be interested in her. About a year later Cara was walking the catwalks in designs by Chanel, Dolce and Gabbana, Fendi, Stella McCartney and others. A star is born. Quite literally. The British magazine Vogue declared Cara Delevingne the star of the 2012 season.
Her career took a completely different direction than what she’d always dreamed of. When she was little she wanted to be a dentist. Or a super hero.

Advertising campaigns and fashion shows are not the only activities that Cara Delevingne wants to do. Since she was 13 she has been composing music and playing instruments, although she opted for the drums, which is perhaps a bit unusual for a girl.
In addition, sheis a very good singer. Last year she sang the vocals in the song Sonnentanz (The Sun Don´t Shine). This is the acoustic version of the Will Heard song which peaked at numberthree in the iTunes charts for the British Isles.
“I’ve known Cara since 14 or 15,” said Heard. “Her singing is really good,” he added. Cara Delevingne has not been hiding her musical ambitions for some time now. “I want to make music. I’d like to sing and I’d like to play,” she said. Her wish has come true, she’s currently working on her first studio album with the help of her singer friend Rita Ora.
On the silver screen

Apart from modelling, music and singing Cara Delevingne has another great passion, acting. Her first role, albeit a small one, was as Princess Sorokina in the film rendition of the famous story about Anna Karenina. The next film in which we can see her acting talents is The Face of an Angel. The film is about the student Anna Knox, who is under suspicion for the murder of her roommate. Cara admits that although she has many activities, it is acting that she really wants to make a go of. “I’m willing to do anything for acting,” she said in one interview. “I’d shave my head, or I’d even jump with a parachute,” she explained.
And what is her dream role? Cat Woman in Batman and Martha in the drama Who’s Afraid of Virginia Woolf.

Cara Delevingne is very successful, and therefore she decided to protect her name from misuse and registered it as a trademark. She wants to prevent others from making money on her name. The company is called Cara & Co and is the owner of all the marketing rights related to using the name Cara Delevingne.
In the fashion world this is not an isolated case. Both Kate Moss and Victoria Beckham have trademarked their names.
Setting up Cara & Co immediately gave rise to speculation that Cara might start creating her own clothing brand. The model herself has confirmed that so far she only wants to take part in designing a new collection of t-shirts. She has yet to reveal any more of her ambitions in this direction.
A different person in private

In the privacy of her own home the most popular model at the moment, the budding singer and fledgling actress is completely different to the woman we know from the catwalks and gala evenings. She likes to dress in boy’s clothes and at first sight few would recognise her as a famous model. She says of herself, that she is very temperamental and abrasive. Indeed, her family nicknamed her ‘Monster’.
Although she’s made millions, she still lives at home with her parents. In her free time she plays Call of Duty on the net. Anyone can join her, her gaming name is Caradele.
The new Kate Moss

Right from the start of her career Cara Delevingne has been compared to Kate Moss. They have a lot in common. They both come from Great Britain, they were discovered by the same company. Like Kate, Cara has managed find her own way, they are both rebels often drawing attention to themselves through controversial behaviour. Both have a similar scandal behind them – Kate Moss was caught taking cocaine, Cara Delevingne shocked when she was snapped with a white powder that resembled cocaine. So far, it hasn’t been proven whether it really was the drug.
One way or another, this controversy has not reduced interest in the services of the British model, who, as she herself says, is glad that they compare her to Kate Moss. The older countrywoman and colleague is a great role model for Cara.
Karl Lagerfeld and Cara

One of Cara Delevingne’s biggest fans is the famous designer Karl Lagerfeld, who often puts the model in his campaigns and fashion shows. “She’s a personality,” he said of Cara in an interview for British Vogue last March. “She’s the Charlie Chaplin of the fashion world,” Lagerfeld added. The famous designer also commented on the model’s acting ambitions. “I’d love to see her in a silent film, just like Chaplin. It would be great.”

THE ETERNAL GLORY OF THE BURGER