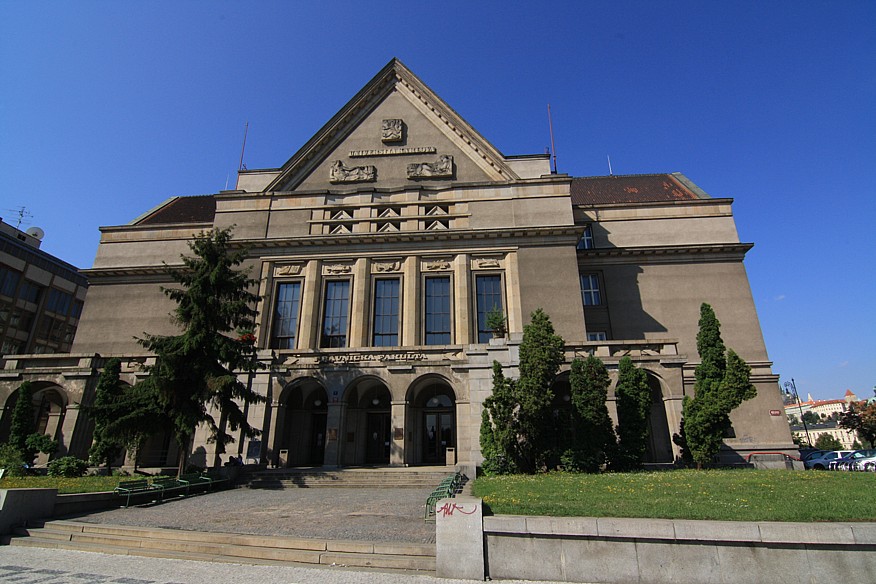 When you reach the end of Pařížská Street towards the Hotel InterContinental, on the opposite side of the waterfront, you will see a large building with a distinctive gable. It is the Prague Faculty of Law.

The Neoclassical building is the work of architect Jan Kotěra. It stands on the Vltava waterfront, was completed in 1931 and its construction was accompanied by financial, political and other problems. Today it educates the Czech legal elite. Feel free to spend a moment among the students and professors. As nowadays you can look around the faculty from the inside!

Walking through the lobby you enter a huge temple of legal science. You will immediately notice the large central hall, which students call the pool. The current faculty has been used to train and educate future lawyers ever since 1931, when it was completed. Until then lawyers were educated in the Karolinum building on Prague’s Ovocný trh, which, however, was not big enough by the turn of the last century. So an important decision was made. A new Czech University arose, which would also be part of the Faculty of Law. The building would stand by Čechův Bridge and the German University was to be built on the street exactly opposite, the exterior of which was to be the mirror image of the Czech building. Czechs vs. Germans, such was the audacious plan.

The design of the new buildings was entrusted to Jan Kotěra, a leading figure of Czech modern architecture. The year was 1907. A year later saw the ceremonial laying of the foundation stones of the two universities attended by the then Rector of the Charles University Leopold Heyrovský, who was a specialist in Roman law and was also the author of an excellent textbook on Roman law.

Kotěra prepared the plans for an Art Nouveau building, but they were rejected by the Austrian Archduke Franz Ferdinand d’Este. There then followed both material and financial difficulties, which were further complicated by the Archduke’s death and the subsequent First World War, during which, understandably, the project was put on hold.

After the war and the breakup of the Austro-Hungarian Empire the entire project was reassessed, since, owing to circumstances, a German University was no longer desirable in Prague. Instead the Rector’s office and the theological faculty were to be built.

Even after the death of the Austrian Archduke the architect, Kotěra, had other problems. His mother was from Germany, which was not appreciated by the officials of the new Czech state. They wanted a Czech architect, a man whose origins were purely Czech.

So politics played a big role, leading to Kotěra losing the project. A new public tender was announced. However, this procedure evoked a large wave of criticism in architectural circles and there was dissent from Kotěr’s colleagues, who mostly refused to participate in the tender. So Kotěra came out of the competition triumphantly and it seemed that fortune was finally smiling on him and he could get fully involved in his project, which had taken so many years. But the famous architect fell seriously ill and didn’t live to see its completion. He died in 1923. He did, however, manage to deliver the plans before his death.

In the hands of the successor

The project was taken up by Ladislav Machoň, Kotěra’s pupil and colleague, who decided to complete his teacher’s project. However, he meticulously kept to the plans and designs, refusing to redo or adjust a thing.

The construction continued to be accompanied by financial problems. Six major Prague construction companies had to get together to finish the project. Despite this, however, only one of the buildings was completed – the Faculty of Law, that being in 1931.

The faculty is now 83 years old. It doesn’t matter that you’re not a law student. You can still go inside and examine its unique look and décor, as well as its history.