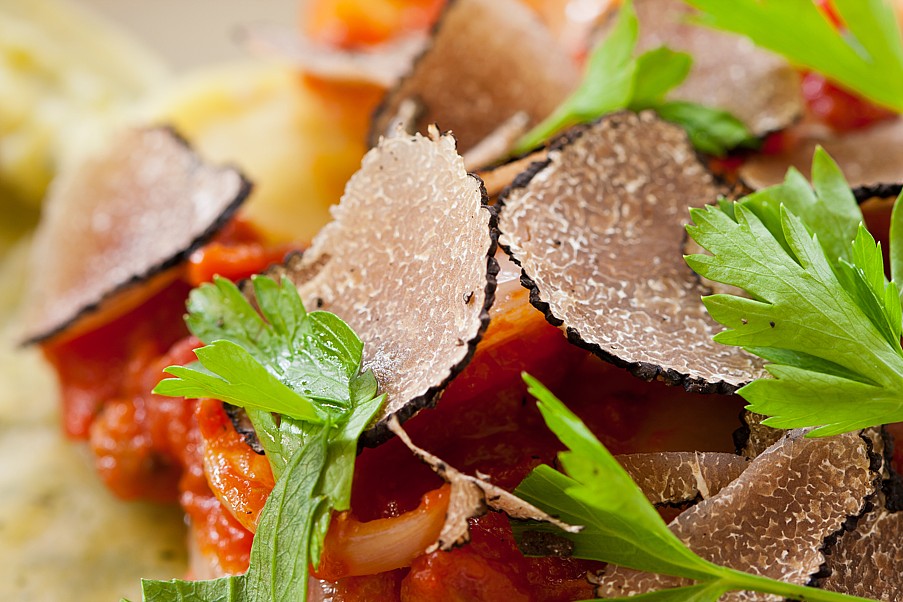 Small and unsightly, white and black warty lumps lie under the roots of young oaks, hazels and hornbeams and they are intensely fragrant. Above the roots pigs, goats and dogs dig wildly and gleefully when they catch their scent. If they start to dig, then a special kind of man – Homo tuberensis, the truffle-seeker – is overjoyed. And we are too.

Imagine September, October, November, and early December. Oak forests, the light ones where the trees are far apart and therefore it is not so dark.The sort of forests where sturdy colossi stand alone, while smaller ones clump together.Forests that also have hazel, hornbeam and linden and where, here and there, a white limestone rock pokes out.Forests in the south of Europe, those of France, Italy, Slovenia and Croatia. Here the autumn is not cold, the air is still warm and the land too, because the limestone works as a storage heater.

An odd couple is walking through these forests, shuffling through the leaflitter. A man and a female animal.A sow, a nanny goat or a bitch. The search for truffles requires peace and quiet and time, therefore seekers are mostly older men. They have free time.

Pasta with the scent of a male

Sows, nanny goats and bitches are used to search for the truffles that are hidden 5 to 30 centimetres below the ground. Truffles contain a substance called testosterase, which is identical to the sex hormone testosterone present in male semen. This substance is just the impetus to make the sow search for truffles. Homo tuberensis urges them on: “Where’s the boar!” The sow, however, will always be thwarted, her master never allows her to eat the boar-truffle. While the truffle disappears into one pocket, a treat comes out of the other as a reward.

The culinary world revolves around these inconspicuous sac fungi from the Tuber family with underground fruiting bodies. No other delicacy is enshrouded by such mystery. Their taste and smell, their size, colour and price, as well as their culinary preparation, are passionately discussed. In turn, any questions about their closely guarded locations and how they are found bring a stony silence. What do truffles smell and taste like? Claudio De Stefano, the head chef at Il Platina in the Italian city of Udine says: “Like truffles. It’s like asking about the taste of salt. Truffle is inimitable and unique. They are so aromatic that they can’t be eaten on their own. You can’t fry them up and have them on toast. To put it simply, they are truffles!” Truffles are added to dishes in pinches – the estimated weight per person is five grams of white truffle or twenty grams of black truffle.

The truffle’s aphrodisiac effects on humans, however, cannot be overemphasized. There are thousands of recipes for dishes with truffles. “The easiest and most attractive for me are wide noodles with butter and Parmesan cheese and coarsely grated truffles on top,” says Claudio De Stefano. However, he considers the peak of gastronomy to be goose liver with truffles.

A mushroom with excellent marketing

Who actually ordained that the truffle will be the most expensive mushroom?
We may think that it is a bit snobby. But the fact is that the truffle does have an interesting aroma. And then there is the element of mystery – this is a subterranean fungus, one you can’t pick out with the naked eye. It lasts longer than normal species, it can be transported over long distances, nonetheless, it does have especially good marketing.

It is the same with the truffle and its pickers today as it is with the famous coffee Kopi Luwak. Previously people would walk through Indonesia’s wilderness collecting the dried faeces of civets. This beast relishes the best and ripest coffee beans. But it only digests the fleshy pulp, not the actual bean. These are collected, roasted and sold for great amounts. Nowadays, however, civets are kept in cages, fed with coffee and their excrement is caught in nets. Something similar has happened to truffles. Today, most of the production comes from artificially planted stands of young oaks, hornbeams and hazels, and not only in France and Italy, but also in Hungary, Spain and New Zealand. The soil under the trees is sprinkled with water containing truffle spores and in a couple of years they can harvest.